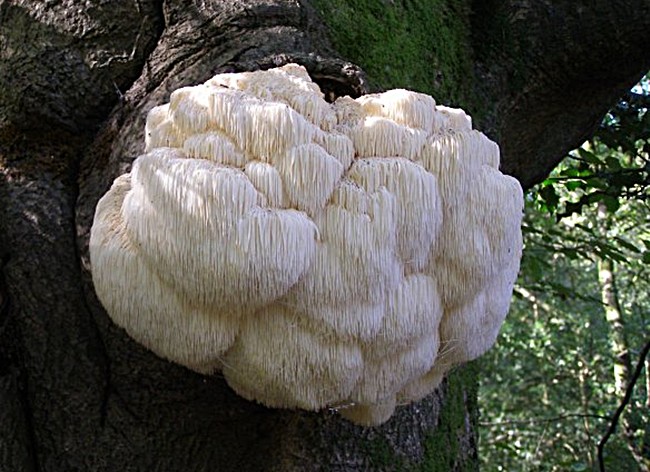 The most incredible benefit of the lion’s mane is undoubtedly its ability to promote nerve regeneration. It helps the nerve damage to repair itself (which has been proven in tests on rats, and anecdotally by its users).

It is also a neuro protective: it protects the death neurons induced by stress, thanks to various antioxidant molecules. It also has anti-cancer properties, and has the ability to slow cellular aging.

This fungus helps reduce symptoms of depression and anxiety.  In a study where 2g were given to a test group, the group was found to be more focused and less irritable than the control group.

The lion’s mane is also a mild hypertensive , which may prove to be an interesting feature for those suffering from hypertension and wishing to treat it naturally. It lowers triglycerides, LDL cholesterol, and increases HDL cholesterol, which is optimal for having good cholesterol levels.

Finally, it allows speeding up the speed of repair of deep wounds when the mushroom is applied directly on it!

When ingested, this fungus can increase the secretion of nerve growth factor (NGF), necessary for the proliferation and growth of neurons. It also stimulates their myelination (the production of myelin sheaths, myelin being a substance used to isolate and protect nerve fibers, such as plastic around a wire). This increases the speed of the nerve impulse, and therefore the speed of transmission of information. Myelin also has a nutritional role, providing nutrients to nerve fibers.

Macrophages are cells that belong to white blood cells, whose role is to phagocyte (ingest and destroy) cell debris and pathogens. Polysaccharides, and particularly ß-glucans present in the fungus, stimulate the immune system and macrophage activity, and also have anti-cancer properties .

Other compounds contained in this fungus called hericenone and erinacin are responsible for the neuroprotection brought by the fungus, as well as effects on nerve regeneration.

While other compounds such as threitol, D-arabinitol and palmitic acid, have antioxidant properties .

Finally, there is a molecule contained in this fungus which is an agonist of the PPARα nuclear receptor, which explains the decrease of the triglyceride level during its consumption (an excessively high triglyceride level favoring the appearance of cardiovascular diseases and diabetes ).