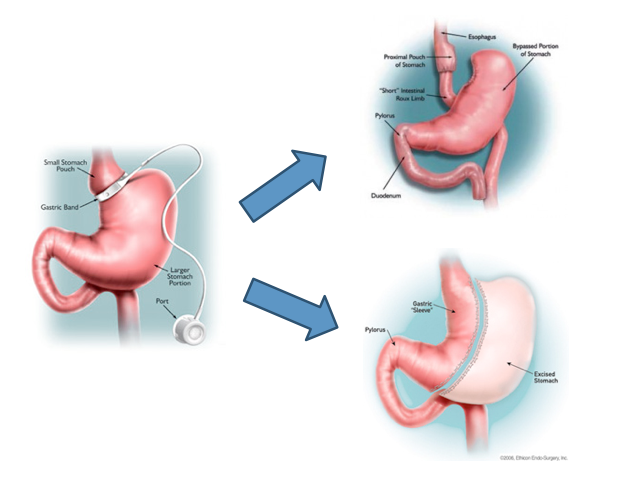 In this section you can find all the current surgical alternatives for the treatment of overweight and obesity such as Gastric Sleeve (Sleeve Gastrectomy), Gastric Bypass and Adjustable Gastric Band. You can check gastric band, bypass or sleeve? cost abroad here.

Gastric Sleeve Surgery (Sleeve Gastrectomy) is a technique that involves reducing the size of the stomach by removing the left portion of the stomach, which includes the area of ​​the gastric fundus, where most of the hormone is produced. It stimulates the appetite called Ghrelin. As a result of gastric sleeve surgery, the patient will lose weight because having a smaller stomach, will be filled with less food and will also have a marked decrease in appetite by having a significant reduction in the hormone Ghrelin.

Gastric sleeve is the surgery that offers the best quality of life of all surgeries for obesity because it provides a rapid postoperative recovery as well as a low rate of post-operative complications, maintaining long-term weight losses quite similar to those obtained with the gastric bypass.
Gastric Sleeve Surgery is indicated in those patients who have a Body Mass Index ≥ 40 (Morbid Obesity) or a Body Mass Index ≥ 33 and who have some disease associated with obesity such as diabetes, hypertension, high cholesterol, etc.

The Gastric Bypass is a mixed technique that offers a restriction component to foods as well as a partial malabsorption of them. The restrictive component consists of creating a small stomach so that the patient at the time of eating feels satisfied with a small amount of food. The component of malabsorption consists of joining a thin intestinal loop to the small stomach so that the food goes directly to the intestine, this will produce a lower absorption of nutrients and calories. In this way, the weight loss mechanisms of the gastric bypass are more effective and remain long term.
Gastric Bypass is best indicated in patients with high rates of obesity, particularly patients with Morbid Obesity (BMI ≥ 40) or Super Morbid Obesity (BMI ≥ 50) who have some associated metabolic diseases such as Diabetes Mellitus type II or Metabolic Syndrome (glucose intolerance, hyperinsulinism, hypertension, high triglycerides).

The Adjustable Gastric Band has as its main advantage that it is a reversible surgery, because in case the patient presents some complication such as slip or erosion of the band, this implanted medical device may be removed permanently. Another important advantage of the Gastric Band is that it does not require cutting or stapling the stomach, so this surgery has a low mortality rate and postoperative complications. This surgery is performed laparoscopically, with an operating time of approximately sixty minutes and a one-day hospitalization time.